by Artie Kane as told to Marian Blue and JoAnn Kane 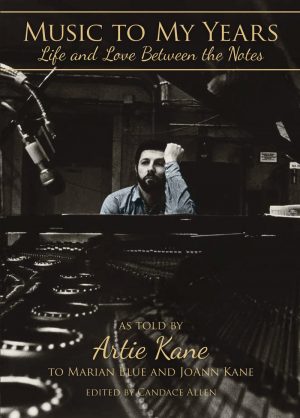 For over fifty years, in radio, on multiple stages, in scores of movie soundtracks, and tête-à-tête performances with the rich and famous, Artie Kane’s music has touched and inspired millions of people. His memoir is the story of a pianist, film composer, and conductor whose credits span the industry and reveal the enduring bond between a gifted musician, his piano, and the people who crowd around it.

Music to My Years captures the romantic as well as the rough-hewn and unrelentingly perfectionist sides of the world of professional entertainment. For the love of music, and in quest of love through eight marriages, Artie reimagines his dreams, and with characteristic candor and acerbic wit, proves that the American landscape thrives as a place for misfits who follow their dreams to success. Music to My Years is also the story of the ever-changing world of professional entertainment, told by an artist whose talents helped to define the transformative era. This memoir will delight and inform lovers of music, fans of Hollywood culture and films, and devotees of TV shows of the last five decades. This story will resonate with anyone who has pursued a dream or struggled to find true love.