Available from University of Washington Press  or Amazon or book stores can order. ISBN 978-0899240312 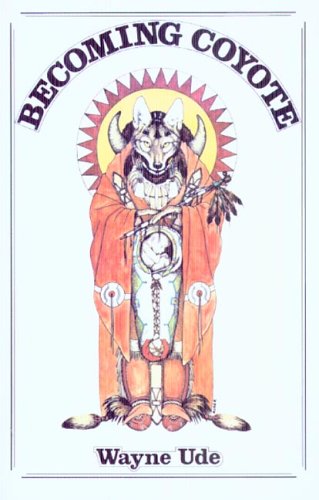 “Two reservation Indians get drunk, break into the Indian Museum, steal old-time costumes, weapons . . . and set off to hunt down a buffalo. Snook, chief of reservation police, and a deputy set out to run the pair down..Ude uses them [Coyote tales] with the skill of a neoclassicist drawing on Greco-Roman mythology to build a theme alien to the European mind, yet naggingly familiar at some deep level. The result is a kind of spiritual experience..Ude’s character development is as leisurely and effortless as his pacing of the story. . . . Becoming Coyote is recommended reading.”
-American Book Review, American Book Review

Wayne Ude was born in Minneapolis in 1946, and that same year removed to Harlen, on the plains of northcentral Montana, near the Ft. Belknap Indian Reservation. He studied in creative writing programs at Montana and Massachusetts, and later served as director of the Ft. Belknap Community Action Program and of the Amherst Council on Aging. Since 1976 he has taught in university writing programs until retiring in 1996. See more at http://Wayne Ude